Listed on the National Register of Historic Places, the Pace House was built by a son of pioneer Vinings settler Hardy Pace.

In the summer of 1864, as federal troops advanced upon Atlanta, Pace, age 78, left Vinings for safety elsewhere. Gen. O.O. Howard used the house as a headquarters while planning the Battle of Atlanta. Today, the Solomon and Penelopy Pace House consists of three rooms: a parlor, dining room and bedroom. The adjacent Old Pavilion (c. 1874) was moved to the site in 1996. The two buildings are now connected by a large open deck.

The Vinings Historic Preservation Society (VHPS) acquired the Pace House in 1994 and has since been responsible for its upkeep. Hardy Pace's great-great-granddaughter, Ruth Carter Vanneman, established the VHPS and bequeathed the property to the organization after her death.

The gallery below shows a few projects undertaken at the Pace House in recent years.

2015: A rear corner of the house was sinking. The foundation was raised and stabilized, and the crawl space was encapsulated. Thanks to the Cobb County Board of Commissioners and the Historic Preservation Division of the Georgia Department of Natural Resources for supporting this restoration work with a $10,000 grant.

2010: The rotting wraparound porch was replaced.

2009: The house's original chimney was falling off. A historic brick mason from Savannah rebuilt the chimney to historically accurate standards while meeting modern building codes. Thanks to the Vinings Village Woman’s Club for financing this project. 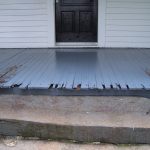 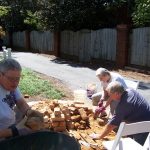 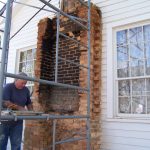