The diminutive Yarbrough House, surrounded by a white picket fence, sits in the heart of Vinings Village at the intersection of Paces Ferry and Paces Mill roads.

Built in 1880 by Samuel Yarbrough for his wife Ella Pace Yarbrough, granddaughter of early Vinings settler Hardy Pace, the house remained in the Pace family for more than a century.

In the mid-1900s, it was used as the Paces Tea House, a lunch and refreshment spot for those spending the day at the many antique shops in Vinings.

In the late 1970s, Pace descendant (and VHPS founder) Ruth Carter Vanneman purchased the house and leased it for use as a restaurant, the Old Vinings Inn. The front and side porches were enclosed and a kitchen was added to the original two-room structure.

When Vanneman died in 1992, the restaurant moved across the street and the fate of the building became uncertain. Piedmont Hospital purchased the property in order to build a clinic, and then generously donated the house to the newly-organized VHPS.

After extensive renovations (including removing the 1970s additions), Yarbrough House was returned to its near-original state and is now used as a Vinings welcome and history center.

Yarbrough House is designated as a Cobb County Historic Landmark.

These photos show some of the work on Yarbrough House in recent years, including a roof replacement, chimney repair and lead paint remediation. Through the generosity of Vinings organizations and volunteers – notably the Vinings Village Woman's Club and the Vinings Village Civic Club – Yarbrough House has also been gifted with an awning, mailbox, flagpole, benches, and a kiosk to display a historic Vinings walking tour. 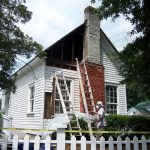 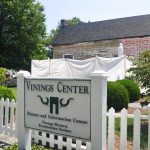 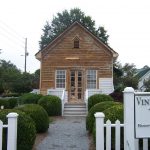